Introduction of Gluten to Infants

A recent research article published in JAMA Pediatrics1 provides more information about the timing of introduction  to gluten  in babies first foods and  the risk of developing celiac disease. Download your copy here.

This very interesting study suggests that early introduction of gluten at 4 months of age may result in a decreased risk of developing celiac disease. However, this study was not perfectly designed to answer the question about risk of celiac disease because it was more interested in all six foods and allergy. It is not known if the introduction of all these foods early together influenced the findings in unexpected ways. Also, as we will discuss, there are better designed studies to address this issue for babies at a high genetic risk of celiac disease. Altogether, the number of celiac disease cases diagnosed was very low (only 7) and the follow up time was quite short, so we don’t know if we followed the children for longer, whether similar numbers of celiac disease cases would be diagnosed in both groups. Also, the study does not tell us the amount of gluten babies need to be introduced to with their first foods in order to prevent an increased risk of celiac disease. This is simply not known even from other studies.

A number of other studies have attempted to address  the issue of timing  of introduction  of first foods and risk for celiac  disease.  These  studies  all differ according  to the age at which gluten was introduced, the amount  of gluten  given and the length  of follow-up*. Some  of the most compelling studies only included babies at genetic risk or with a family history of celiac disease3 and, like the study we discussed  above1, used a group  randomization approach3 4. Altogether, the results of these  studies  demonstrate  that early introduction  of gluten  at 4-6 months does not increase the risk of celiac disease later in life, appears to be safe and may well actually decrease the risk of developing celiac disease. 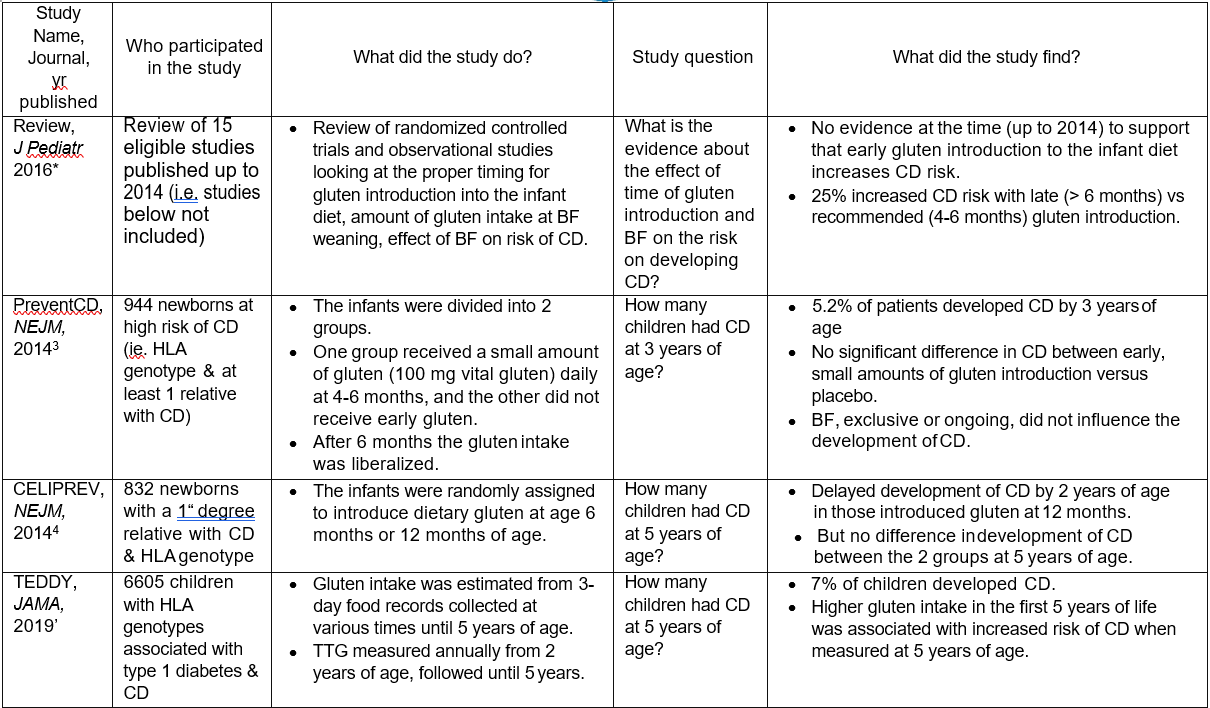